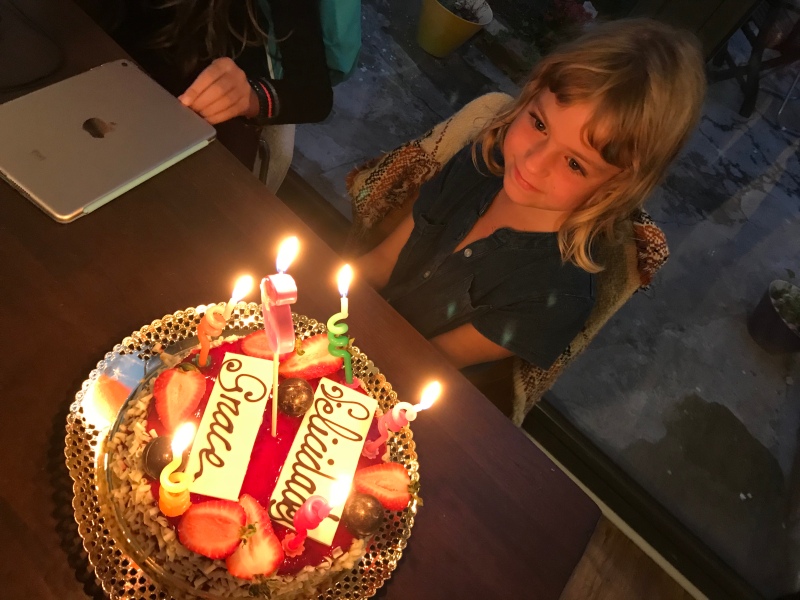 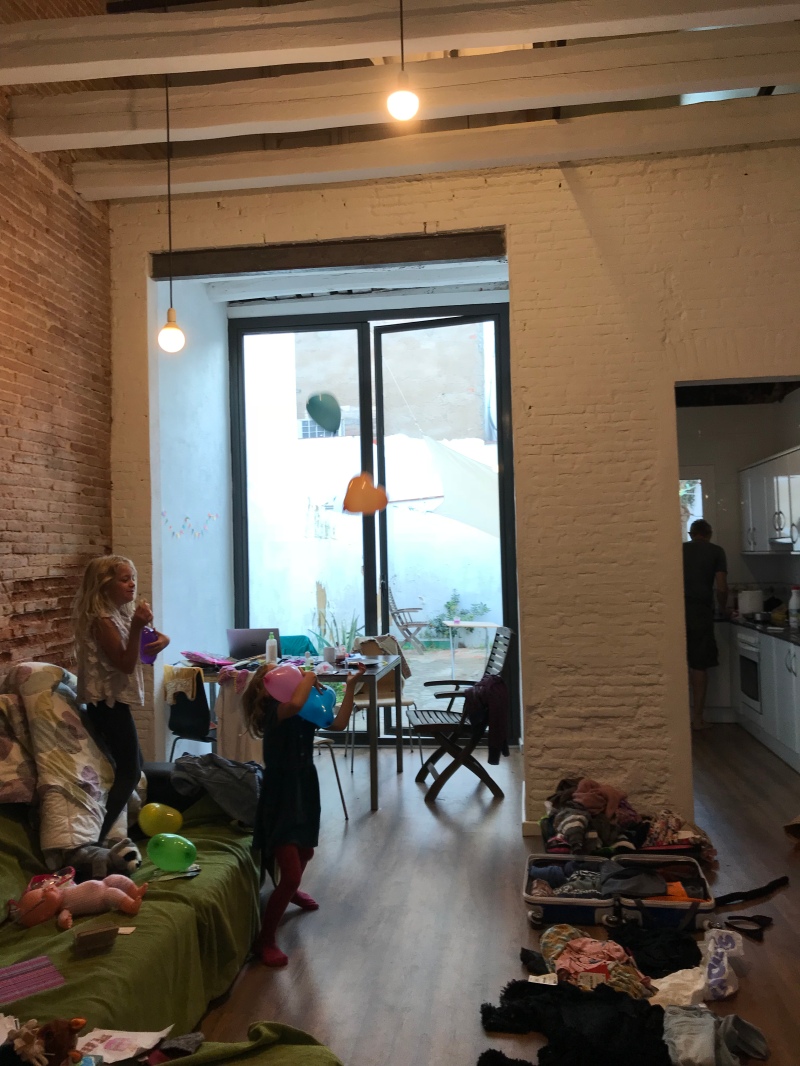 Our Grace is now 6 years old! Her birthday is on October 20. She shares the same birthday as my dad who passed away in 1999. The old saying of ‘how time flies when you are having fun’ is so true. I can’t believe how quickly the past six years have come and gone. I have such a vivid memory of the day that Grace was born. We brought her home to the first house that we rented after arriving on Maui February, 2011. The house was on West Kuiaha in Haiku and we had these great neighbors, Neil Vonhof and Tracy Mills. I remember Tiffany handing our new baby to Neil. I am not sure how much baby holding experience that Neil had but he seemed to enjoy the experience. Even though we have moved from West Kuiaha, we continue to keep in touch with Neil and Tracy who we now consider to be lifelong friends.

Another milestone occurred during our travels; Grace lost her 1st tooth in Madrid a couple of weeks ago! Much to our surprise, her tooth fairy (named Lupita), even found her in Madrid and left her a lovely note with (2) one Euro coins.

To celebrate Grace’s birthday, we ordered a ‘special strawberry cake’ from the bakery around the corner. We all had little presents for her that we had purchased here and there in various shops in Portugal and Spain the past couple of months (carefully hidden of course). We had a very nice lunch at a seaside restaurant in the quaint neighboring village of Sitges. The weather even cooperated and the girls were able to spend a few hours in the water afterwards. A heartfelt thank you to all the family members and friends who sent birthday greetings to Grace! 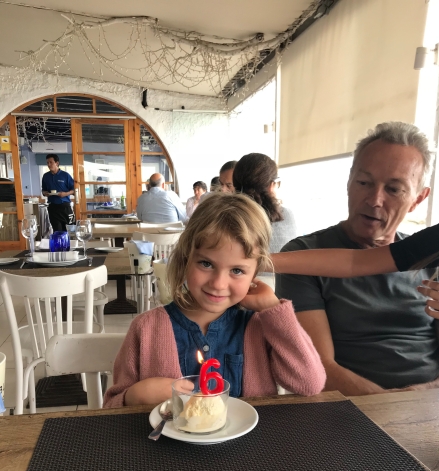 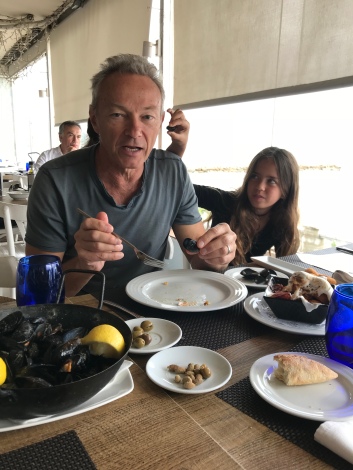 We are now down to our last few days in Spain. We have a rental car to return at the airport and then will spend one more night in a Barcelona hotel before departing to Nuremburg, Germany next Tuesday.  Not much time to ‘brush up on my German’ but I will give it a try anyway. The Nuremburg area of Germany is where my father had one of his first jobs in his youth (Grundig). His father (my grandfather who I never met since he died in his 50’s) is buried in the small neighboring village of Rostal, Germany. My father is never far from my thoughts as I tread my way gingerly thru this challenging 24/7 task of parenting three young girls along with my wife, Tiffany. My father and mother raised 10 children and I marvel everyday how they accomplished this feat and got us all to adulthood!

Our last Airbnb in Spain is a quirky, narrow almost 3 story tall space. The owner is a free-lance architect (arquitectura in Spanish) and we think that this is actually where he lives when the space is not rented. The place has a rustic and also a postmodern industrial warehouse type of appeal. There are some very interesting architectural features that would definitely not be approved by any building inspectors that I know. There is a large opening in the upper level bedroom (which is actually about 13 ft. above the main floor) where the flooring has been removed and the wood beams are exposed. What makes this unique is not the hole in the floor but the fact that there is no railing. The photos kind of speak for themselves. There is also no handrail on either side of the concrete & tile stairs which is designed as a partial archway bridge.  No doubt that this is the reason that the Airbnb description states that this dwelling is not suitable for small children! Tiffany and I had intended to sleep upstairs and we did this for one night until Tiffany had a premonition that one of the children would wander upstairs in the middle of the night looking for us and accidentally fall thru the opening in the floor. Tiffany was also concerned that I might ‘sleep walk’ (which I don’t) and would also unintentionally ‘go over the edge’. After one night, we decided to move the mattress downstairs and we all slept on the main floor for the duration of our stay to avoid any mishaps. 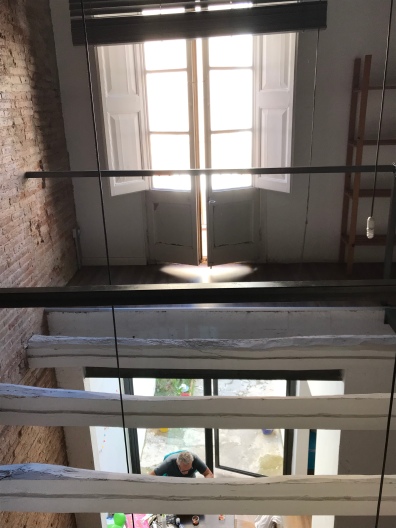 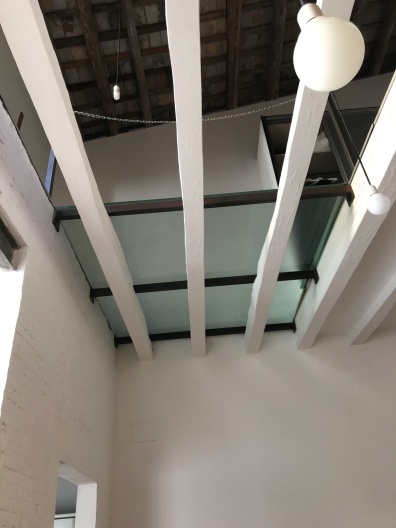 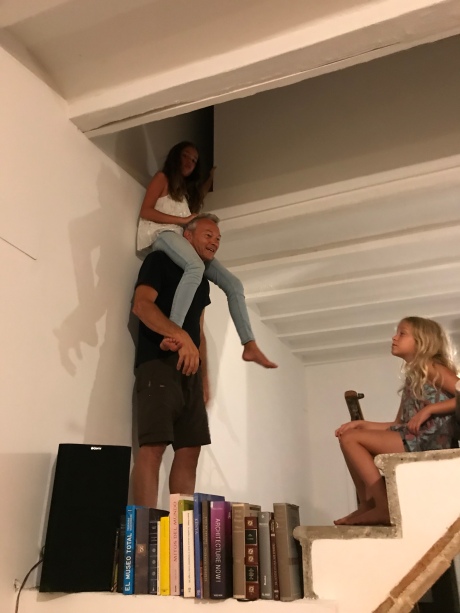 We had a couple of days of very heavy thunderstorms and pounding rain and discovered that the roof had sprung a leak (actually several leaks). We got out the pots and pans to catch the drips. One locked room on the upper floor (off limits to Airbnb renters) appeared to have the most severe roof leak. The only way into the room was thru a narrow opening in the wall above the stair landing. We contacted the owner and informed him of the leak situation. He told us that he had repaired the leaks but obviously not well enough. He allowed us permission to enter the locked room thru the narrow opening in the wall. Scarlet volunteered  to squeeze thru the opening (from my shoulders). We managed to get a bucket into the room and she mopped up the rainwater and placed the bucket to catch the drips. Within the next 24 hours the large bucket had filled up with water from the rain leaks and Scarlet had to empty it and mop up the floor once gain since we were concerned about damage to the floor and ceiling.

Mahalo to Neil Vonhof, Tracy Mills and everyone else (you know who you are) for all your great comments to our travel blog.