While attempting to purchase online tickets for el Museo del Prado, I discovered that you can visit this famous art museum (one of the five most visited sites in the world) for free  during the last two hours of each day.  As we had already purchased a two day city tour hop on and off bus ticket, I carefully planned that for the 2nd day, Sunday we could enjoy a tour of modern Madrid, have something to eat and arrive at the Museo at exactly 17:00.  Much to my delight this part of the plan was fulfilled exceedingly well.  As we hopped off the bus and proceeded to the entrance of the Prado, we became aware of a line to get in.  This line snaked back and forth around the side of the building and probably consisted of somewhere between 500 – 750 people.  The wait was just 30 minutes as the line moved very quickly.  I was a bit naive to think we would show up and waltz right in; nevertheless, we  had the incredible opportunity to be among the work of the Masters.  Most of what we saw was heavily religious themed and the children asked questions and made comments like “Mommy why is his head on a plate to a massive wall sized depiction of John the Baptist?”  or “Now I am scared I will/ we will be nailed to a cross”. 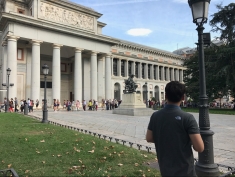 We spent one hour at the Prado and a half hour buying postcards and other souvenirs, including a cross stitch kit by Goya. Always trying to think up ways to keep with the curriculum.  I managed to sneak a couple of photos, the first one I was unaware that it was forbidden and the second, well I just couldn’t help myself.

The Garden of Earthly Delights, Bosch

The very next day we went to the Madrid Zoo Aquarium, located a few kilometers from the city.  I persuaded Bernie to drive, again a mistake! We looped around Bernie’s roundabout and ended up parking in a swanky garage on Calle de Serrano, this is the high end shopping district comparable to Chicago’s Magnificent Mile. After parking the car accepting defeat we hailed a taxi and  implored the driver to admit our 5 passengers, 1 rider above the legal limit and held my breath the whole way… that no-one would get carsick.  We arrived at the zoo, and after a not so easy entry with our smartphone ticket-less tickets, entered the expansive zoo aquarium.  We dashed to the Pandas, the stars of the zoo.  Scarlet’s only wish for this trip was to see Pandas in China.  When I discovered that they have Pandas at the Madrid zoo it was a must see!  We still plan to go to Hong Kong for Christmas, but just in case, we got to see the Pandas of Madrid.   There were throngs of elementary school-age children crowding the Pandas exhibit, but we were able to watch Bing Xing delicately eat a green apple followed by many stalks of bamboo. See the video bellow:

Next we walked around the corner and too are delight saw baby elephants cuddling affectionately with their mothers.

Later we saw many delightful animals, 2 bird shows and very spectacular dolphin show.  We again were limited with the time as I thought the park stayed open until 20:00 only to find out that it closed at 17:30.  I gave Scarlet the choice to go to the gift shop with her younger sisters or run back for another quick peak at the Pandas.  Much to our delight she chose the later and we were rewarding with a viewing of a young female panda,  Chulina (Cutie) was born in January making her an 8 month old cub.  I recently learned that there are over 2000 Pandas in the wild in China and more in zoos. Madrid has had very good success with breeding these magnificent animals.  See the below video:

All was well in the end as we found the right city bus to get us in the neighborhood of our Airbnb, found a mall which contained a  Starbucks and managed to walk several blocks in the right direction,  play at a park, and find our way home.